Take the Gratitude Challenge !
When we practice gratitude, sometimes it tends to be a quick, shallow gratitude. We say a quick thank you, or list what we’re grateful for, but it is momentary.  As soon as we’ve finished saying the words, we often move on to thinking about something else.   Real gratitude should be deeper and more meaningful than that.  It should affect both the giver and the receiver for more than just a moment.  So here is the challenge.
Each day this week, think of one person you are grateful for and a specific time (or times) they did or said something that blessed you.
Think of a specific situation and reason you are grateful for that person.  Really think about it. Let it sink in.  It doesn’t have to be for something monumental.  It can be as simple as being thankful for the bus driver that picks up your kids and gets them to school safely every morning, or the bagger at the grocery store that packs up your groceries for you.  It can highlight generational appreciation, like being thankful for your grandmother who taught you how to make her amazing apple pie.  It can be expressing thanks to your kids for always wanting a goodnight kiss from you before bed. If you really stop to think about it, there are probably a whole lot of people to be grateful for.
Take the time to thank that person – intentionally, specifically, and meaningfully.
Tell that person specifically why you are thankful for them or for what they have done.  Thank them face-to-face; write them a letter; call them on the phone; send them a text.  It doesn’t really matter what medium is used.  What matters is that you communicate your gratitude in an intentional and specific manner.  “Thank you so much for saving me a seat at lunch today. That was really considerate.” means a lot more than just a quick “thanks”.
Expressing gratitude can truly be restorative to your demeanor, your health, and your relationships.  It is also a kindness than really blesses others and is so needed in the world we live in today.
Try it out!  See what the gratitude challenge can do for you and the people around you!

Posted by lindsaylew at 7:00 PM No comments:

With the Summer Olympics starting, I wanted to use it as an opportunity for both a lesson on the Olympics and a geography lesson. 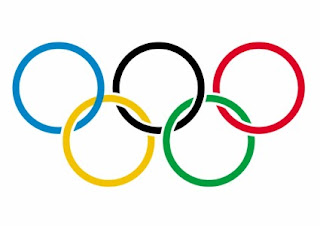 The celebration of the games encompasses many rituals and symbols.

The Olympic flag is white with 5 rings – blue, black, red, yellow, and green.  Together, they represent the five inhabited continents, although no particular ring is meant to represent any specific continent. (The Americas are treated as one continent.) The rings are interlaced to represent the idea that the Olympics are universal, bringing athletes from the entire world together.

The Olympic torch is lit in Ancient Olympia, Greece, emphasizing the connection between the modern Olympic games and the ancient Olympic games (which were in Greece).  The lighting marks the symbolic start of the Olympic Torch Relay.  A long relay of runners carry the torch from Greece to the country hosting the Olympics and all over that host country. It takes many many weeks before it reaches  the Olympic Stadium for the Opening Ceremony.

The Olympic games starts with the  opening ceremonies where the athletes from each country all march in together with their country’s flag.
Then the sports competitions begin. The first, second, and third place finishers in each event receive gold, silver or bronze Olympic medals.

Who revived the idea of the Olympic Games?
A French nobleman, Pierre Fredy, the Baron de Coubertin, born in 1863. When he was young, Coubertin was a very keen sportsman. As he grew older he developed a passionate belief that sport could encourage peace throughout the world and bring people from all over the world together.

Coubertin was inspired by the ancient Olympic Games and travelled around the world, spending his own money, trying to persuade people to revive them. Eventually he managed to bring together representatives of many different countries in Paris, in 1894, and the Olympic Movement was begun.

Did women compete in this first modern Olympic Games?
No! Women began to compete in 1900. For many years there were problems for the women athletes about what to wear, because it was considered very rude to show any part of the body or even the shape of the body! Can you imagine trying to run and jump covered from head to foot in clothes?

What is an Olympiad?
An Olympiad is the period of four years which starts with a summer Olympic Games. Each Olympiad is counted with Roman numerals, and the year of the Games cannot be changed (although Games have been skipped out, as in 1916 during the First World War).

Who chooses the next host for the Olympic Games, and how?
Members of the IOC choose the next venue for the Olympic Games, which must be a city rather than a country. So, for example, the next Olympics, in 2016, will be hosted by Rio de Janeiro, rather than Brazil. Any city which wishes to host the Games can put their bid to the IOC. Only one city from each country can bid, and even putting forward a bid takes a huge amount of work and is very expensive. It usually takes many years to prepare, and of course only one city can be successful!

Who selects each country's team of athletes?
Each country has their own National Olympic Committee (NOC). The NOCs represent their countries at the Olympic Games and select their own national teams.

What is the Olympic torch?
Prior to each Games, the Olympic Torch or Flame is lit in Olympia, Greece and brought to the host city by runners carrying the torch in relay.

Who wins medals?
The athletes or teams who come first, second and third win medals: respectively gold, silver and bronze.

Are the gold medals real gold?
No! They were solid gold until 1912, but are now silver covered with a thin layer of gold.

Why do we have the Olympic rings as the emblem of the Olympic Games?
The five interlocking rings (blue, yellow, black, green, and red respectively) of the emblem was originally designed in 1913 by Pierre de Coubertin, to symbolize the five continents of the world taking part in the Olympic Games (the Americas are viewed as a single continent, and Antarctica is omitted).

Paper Plate Olympic Rings  or trace circles on colored construction paper and cut out and glue on white cardstock.

What is the Olympic motto?
"Citius, Altius, Fortius.", which is Latin for "Swifter, Higher, Stronger"

Here is a link to an awesome world map that you can print as large as you want it (on 1 page, on 4 pages, etc.)  It doesn't have country names, but I like that you can choose how large to print it.

World Countries and their Flags 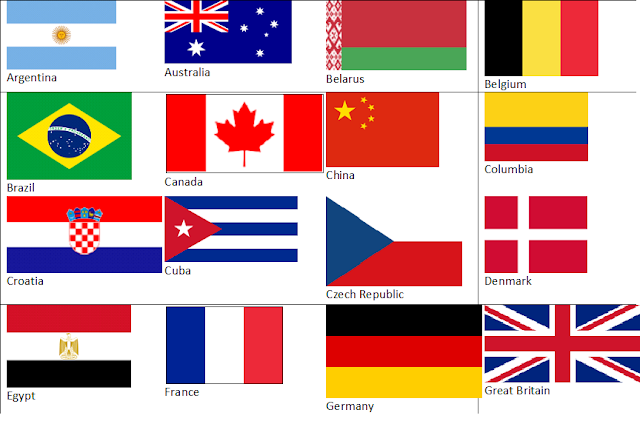 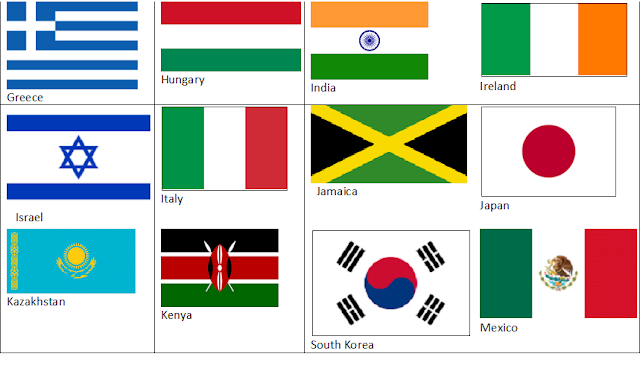 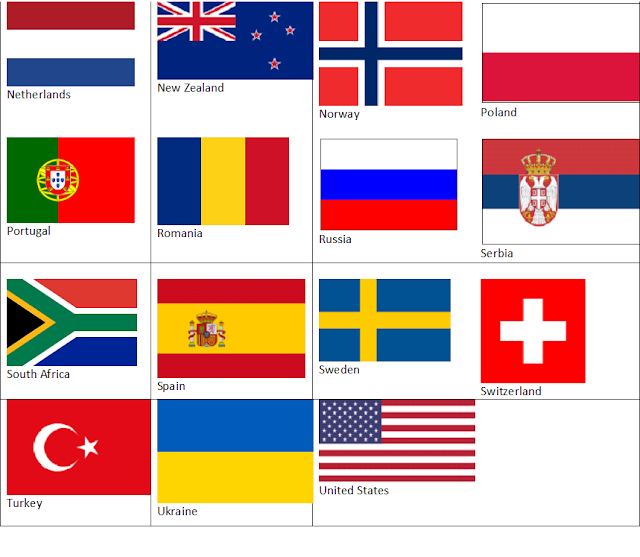 Here is a Printable PDF of this whole Lesson Plan
https://drive.google.com/file/d/0B8kjUkAfacxZaEd0cGo5VklSMUU/view?ts=57a500c2

Posted by lindsaylew at 4:13 PM No comments: 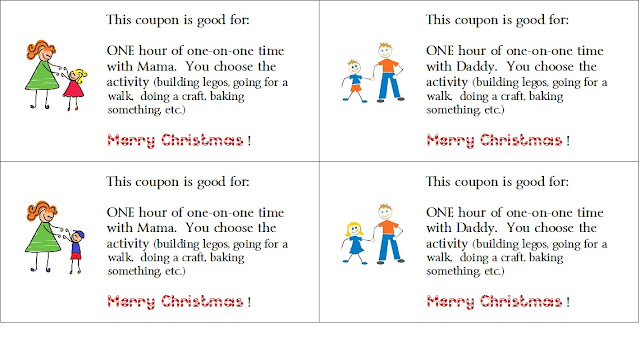 Posted by lindsaylew at 8:48 AM No comments:

So, my kids get pretty sick of sandwiches and the types of other things I pack them for lunch at school.  On weekends, holidays, and summer days, I like to mix it up a little with not too much effort. No, this one is not the healthiest of items, but you can pair them with some cut up fruit or carrots and call it a day.

After my son requested "pizza lunchables", I decided I'd try to instead buy similar ingredients and make them myself.  With a little trial and error, I think we finally hit a winner.  We found a cracker that tastes more like a crunchy pizza crust than a crumbly cracker, and found that warming them up produces a much tastier pizza bite.

Here are the instructions:
You will need a package of shredded mozzarella (the finer shreds), a package of Town House Flatbread sea salt crackers (and this brand/variety seem to work the best, WAY better than any other crackers we've ever tried), and pepperoni (whatever brand/variety you like.) 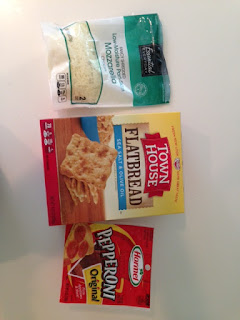 Put a few crackers on a microwaveable plate. 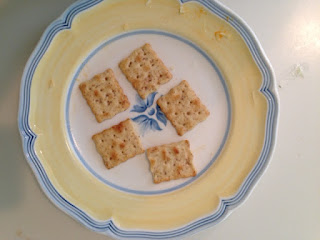 Layer a pepperoni on each cracker. 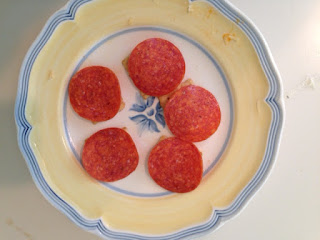 Sprinkle some cheese on top of each pepperoni. (The finer shreds melt faster than the thicker shreds.) 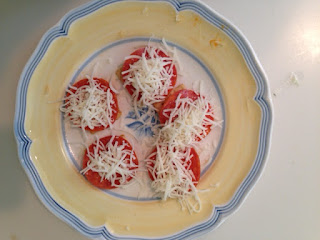 Microwave for 15 seconds or until the cheese is slightly melted. 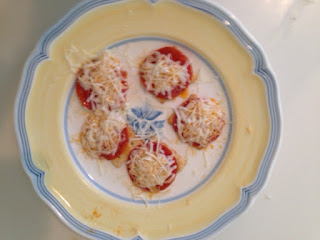 Let cool a little, and enjoy!

Posted by lindsaylew at 1:24 PM No comments: 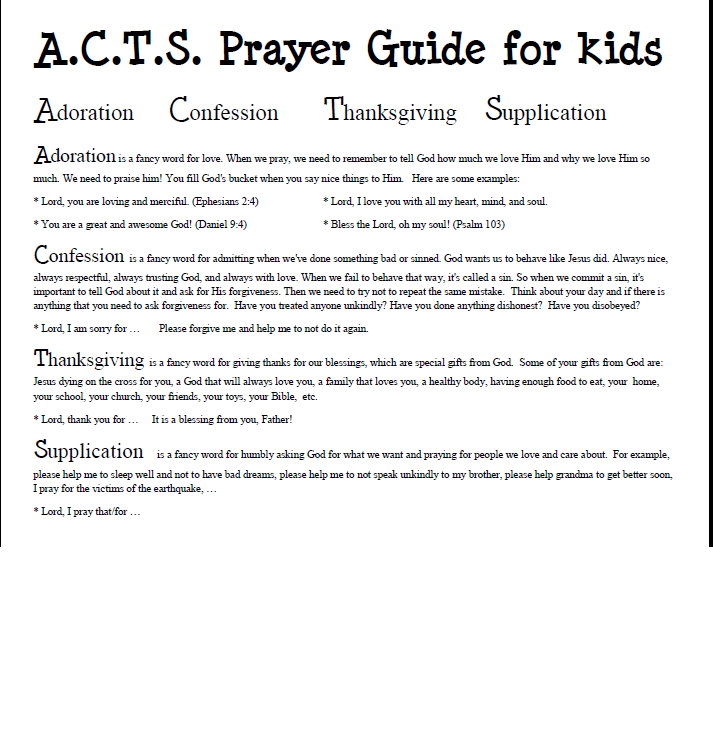 We had a "snow day" (due to the frigid temps, not the snow), so I had the kids do a snowman craft to help fill the day.
I had bought small styrofoam circles in various sizes from the dollar store.  We used toothpicks to put the styrofoam circles together. We rubbed the bottom circle against the table which filed it dow/flattened it a little so the circle would rest on a flat surface.  I then hotglued them to paper plates for stability.
The kids used toothpicks, buttons, and felt scraps to decorate their snowmen (which I hotglued into place.) We were able to cut out mittens, and scarves out of the felt. I even was able to construct felt top hats using hot glue.   The kids had a blast making these. 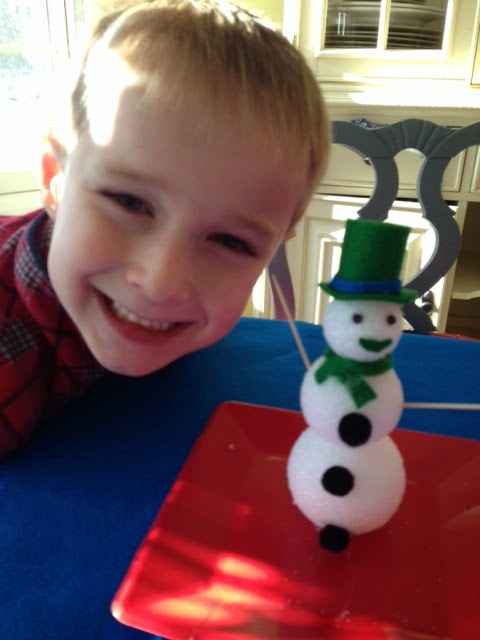 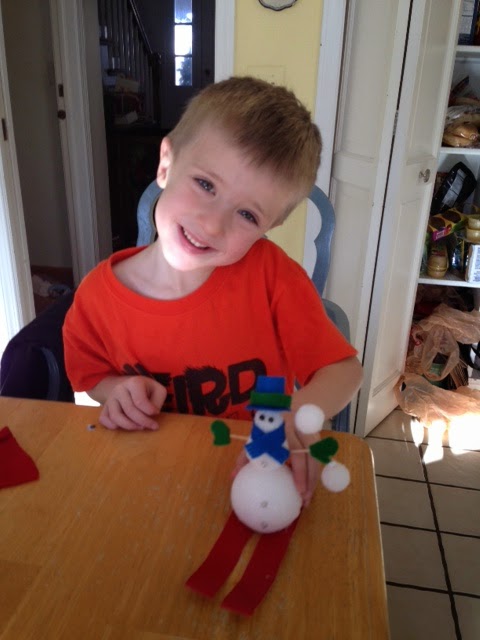 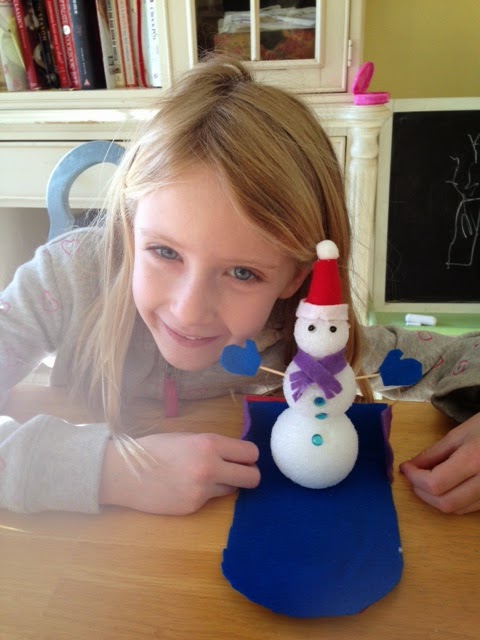 Posted by lindsaylew at 1:26 PM No comments:

Email ThisBlogThis!Share to TwitterShare to FacebookShare to Pinterest
Labels: Winter Crafts and Activities 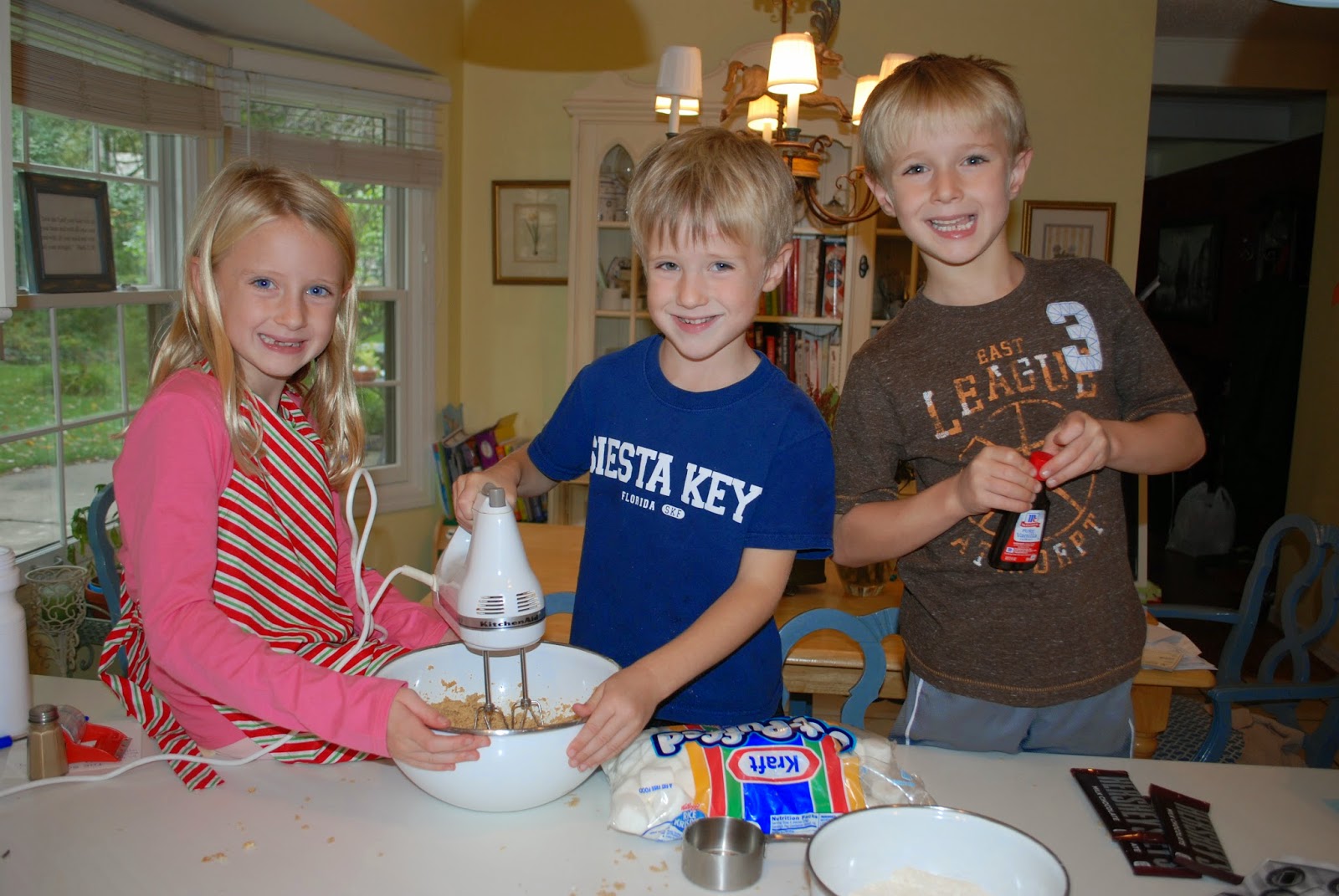 I love s'mores, but we don't often have a fire pit and don't have a working fireplace to do them often.
We found a way to make yummy smores in cookie form!

First, you make the graham cookie base.  Then layer on halved marshmallows and bake for a bit. 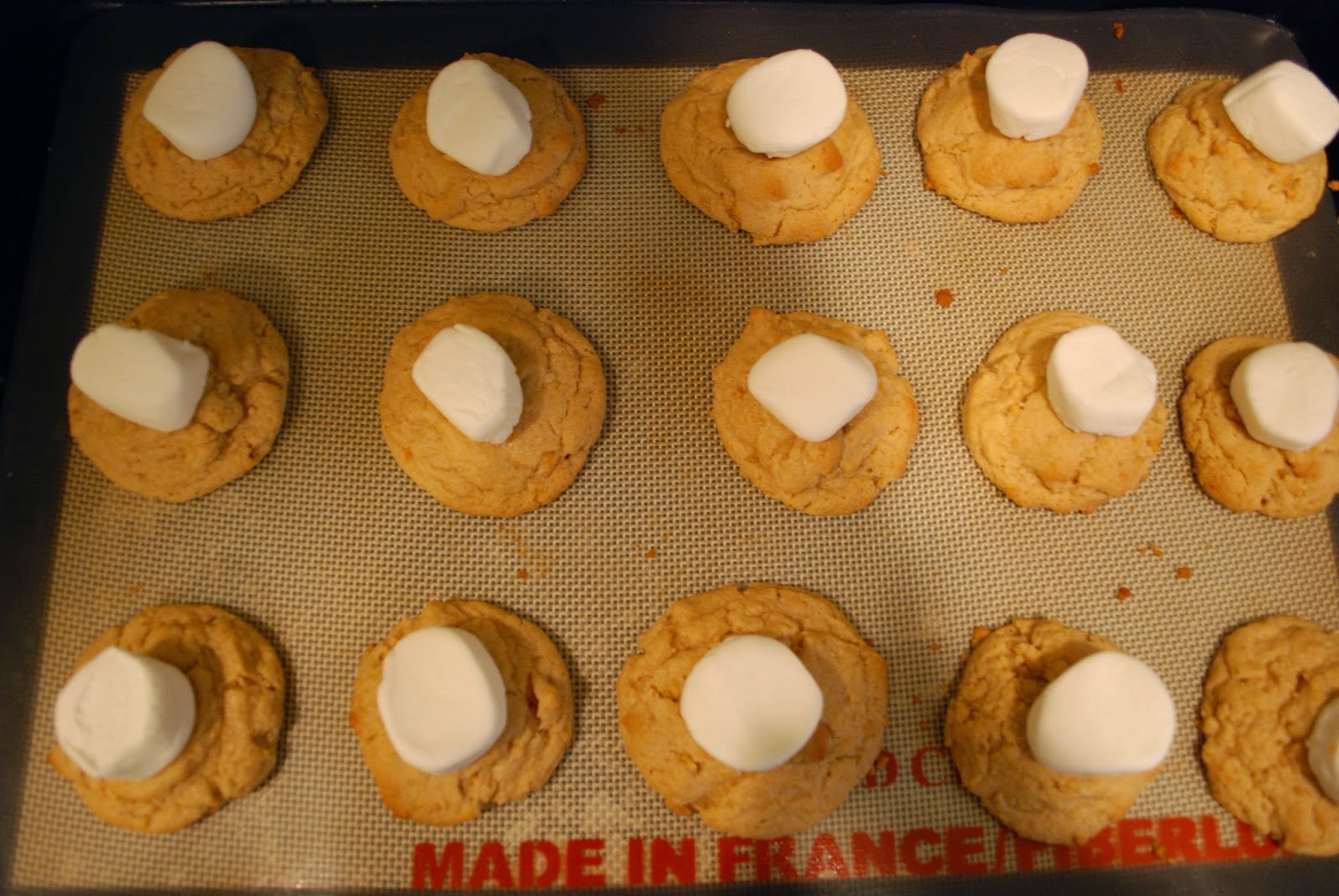 The marshmallows get brown and toasty. 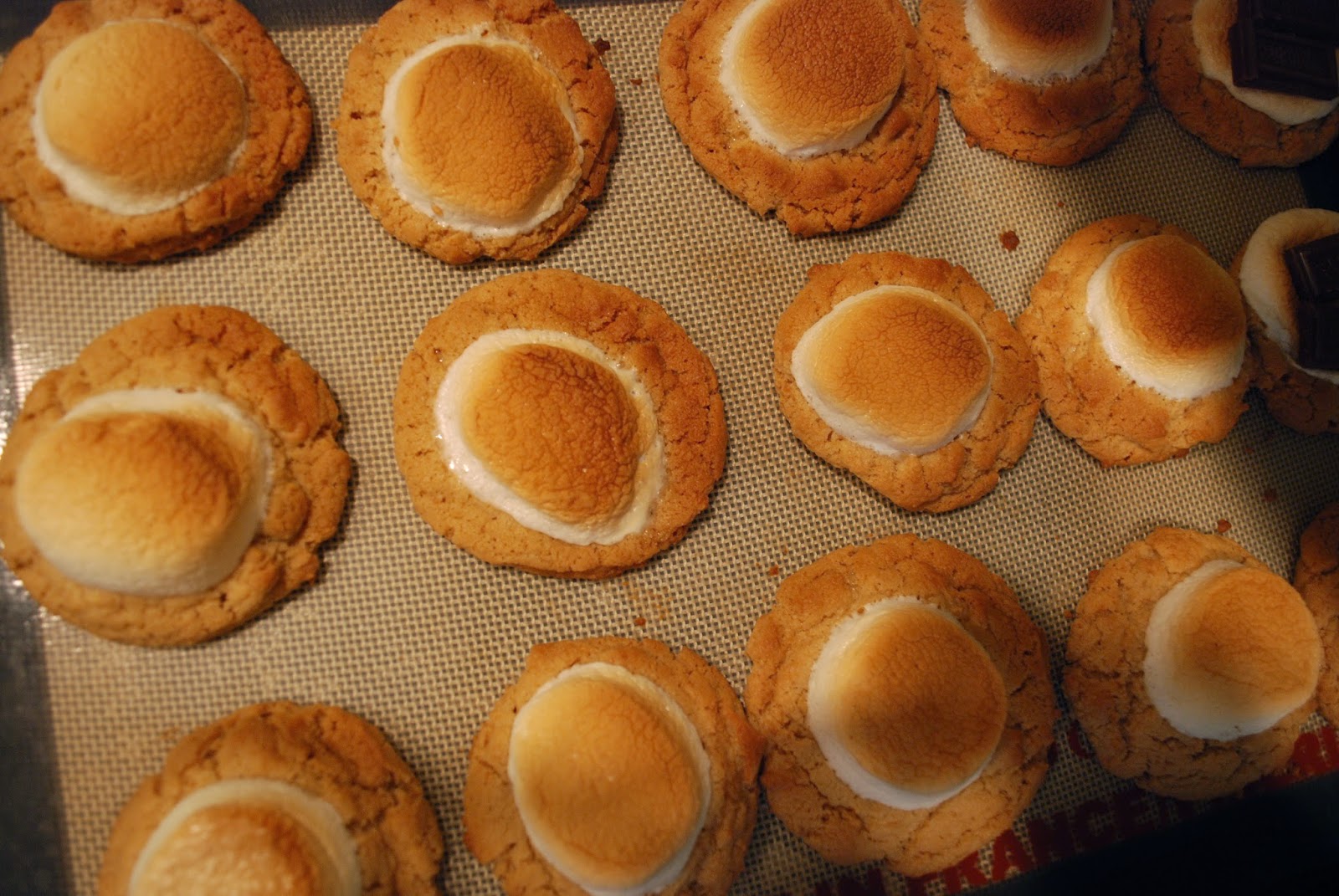 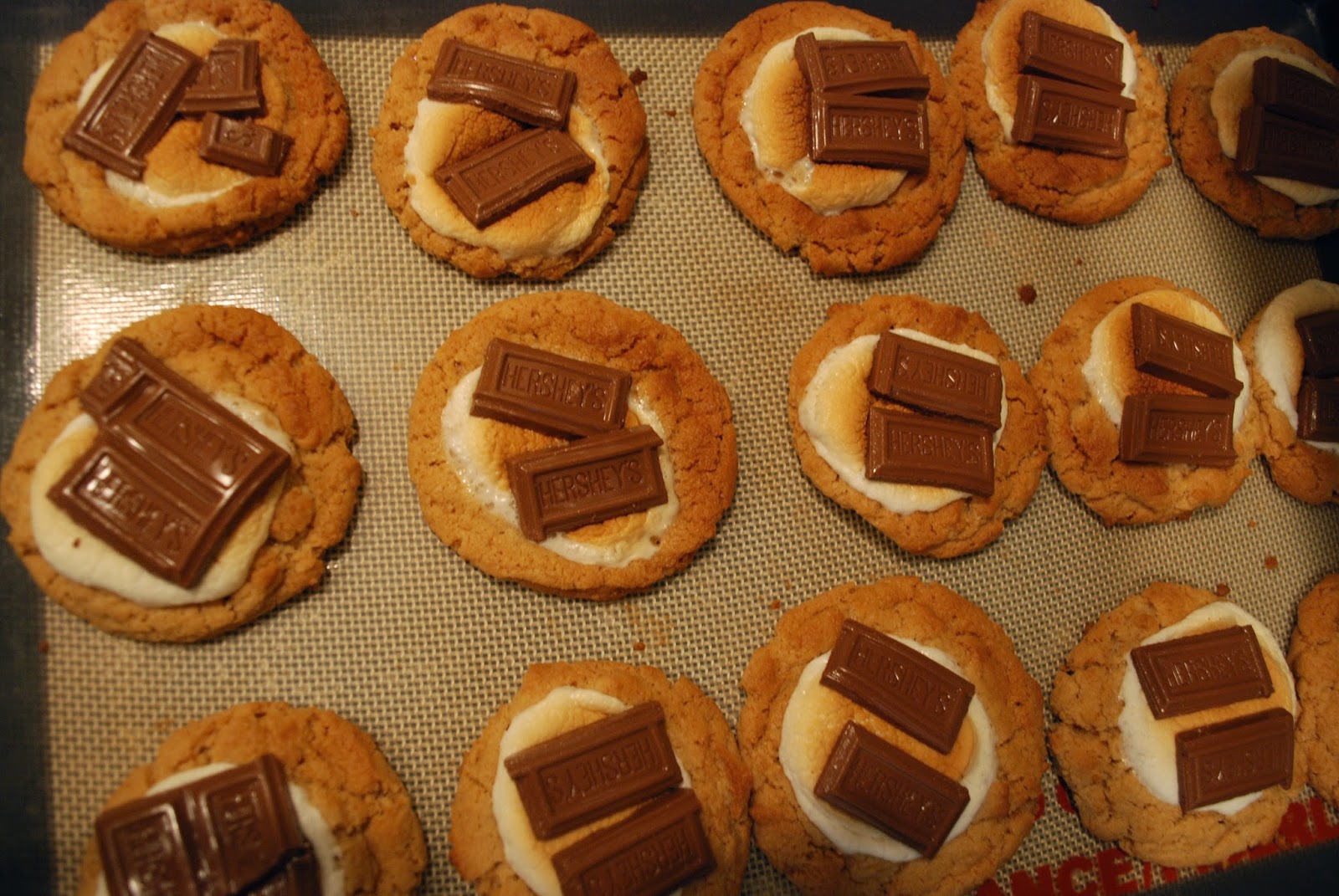 These cookies were a HUGE hit with the kids!
I think they would be awesome with peanut butter (which is what the recipe called for), but we substituted JIF almond butter because of C's peanut allergy, and they came out just fine. 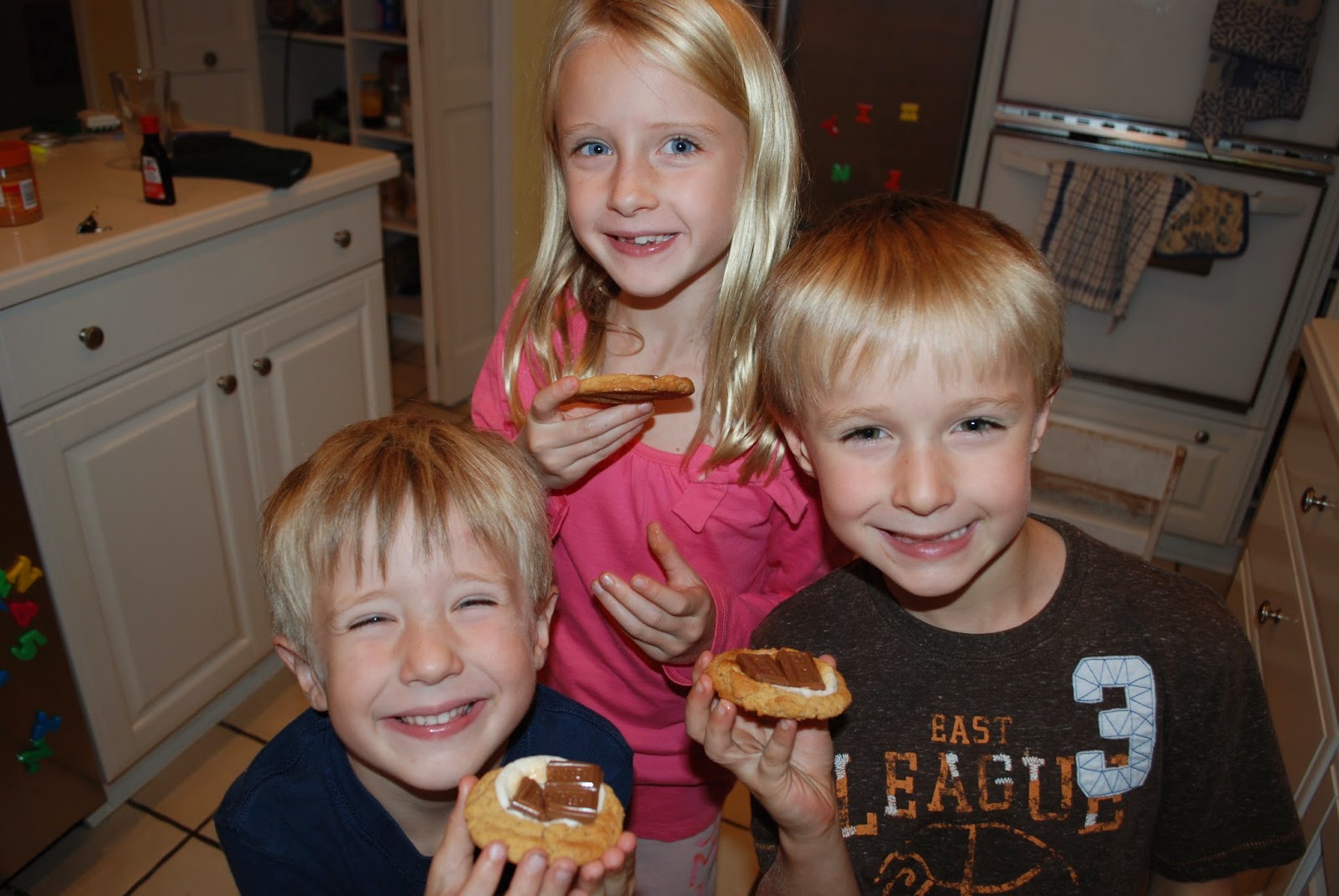 Preheat oven to 375 degrees.  Whisk together flour, graham cracker crumbs, baking soda, and salt in a bowl.  Cream butter, peanut butter/almond butter, sugar, and brown sugar in a large bowl.  Mix with an electric mixer until fluffy, about 5 minutes.  Beat in egg and vanilla until incorporated.
Scoop dough (about 1 Tbsp worth) onto ungreased cookie sheet.  Be careful not to make the scoops too big.  Bake cookies 5 – 6 minutes.
Take out and put marshmallows on top of each cookie. Bake for 2 more minutes.  Turn the oven to broil and bake for 60 – 90 seconds, CAREFULLY watching so they don’t burn because they go from being white to burnt VERY quickly. .  Take out and turn oven back to 375. (This is important!)  Put 1 – 2 mini rectangles of chocolate on top of the marshmallows.  Bake 2 – 3 more minutes to finish off cookie.  Let set on the pan for a good 4 -5  minutes .  (If you try to remove them right away, the center is too soft and will break.)


Posted by lindsaylew at 9:50 AM No comments: